With a mission to change the way commercial industrial spaces are built, McGlothlin has assembled a powerhouse leadership team for Empire Holdings, with 15-year development pro Bowie Holland serving as president, and Trenton Laird, founder of The Construction Group, serving as its construction partner. Together, the team has already led Empire Holdings to acquire and develop more than 100 properties across five states, with a primary focus on Texas.

In September 2022, Empire Holdings, with assistance from Stream Realty and Stan Johnson Company, sold a nine-building, nearly 350,000-square-foot single-tenant portfolio that included assets across five states to Philadelphia-based The Arden Group. Prior to that deal, Empire Holdings, in partnership with Formation Real Estate, completed a $58+ million, 20-property industrial sale, which was ranked #5 among CCIM’s “Biggest Deals of 2021.”

Widely known for her 40-year track record of entrepreneurial excellence, including founding, building, and selling two multi-million-dollar companies (Empire Roofing and Empire Disposal), Empire Holdings’ CEO Sandra McGlothin has always prioritized charitable giving and strengthening the communities in which she operates. Carrying this mission over to Empire Holdings, the company recently donated a 7,494-square-foot building to the Fort Worth Police Department to be used as a substation serving the east side of Fort Worth. The station is located adjacent to the McGlothlin-founded Sun Valley Industrial Park in southeast Fort Worth, a 24.2-acre first-class industrial business center that’s created more than 1,000 jobs, is home to national companies such as UPS, Sunbelt Rentals, TxDOT, Stanley Steamer, and Dish Network, and has been designated an “Industrial Growth Center” in the City of Fort Worth’s long term strategic plan.

“Our tenants are everything, and we know each of them is unique with their own needs,” said Bowie Holland, president of Empire Holdings. “Whether it’s a small design tweak or a full custom build-to-suit, we really strive to know our tenants’ business, and then determine how their facility can complement every aspect of their business operations and allow for future growth.”

“Throughout my career, I became increasingly frustrated with what I could find – and not find – in the way of industrial space on the market. They all lacked the design, flexibility, technology, and infrastructure I needed to unleash the full potential of my businesses,” said Sandra McGlothlin, founder and CEO of Empire Holdings. “My firsthand experience dealing with the conflict and disruption that comes with having to adapt my business to a space, rather than adapt a space to my business, provided the inspiration for Empire Holdings. Our mission is to change the way industrial spaces are built – with a user-focused design that takes our clients’ facility needs and turns them into a strategic business advantage.”

“Sandra and the Empire Holdings team are laser-focused on developing properties with updated infrastructure and design elements that elevate our community and attract the large employers we want to bring to Fort Worth,” said Mattie Parker, Mayor of Fort Worth. “We are fortunate they are investing so much in the Fort Worth community, and are certain they’ll bring the same bottom-line impact to the other cities in which they operate and build.” 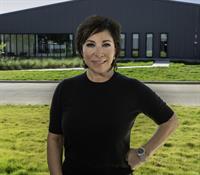